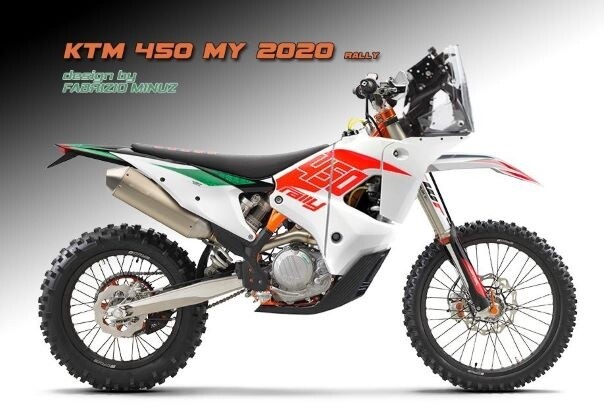 Haute Couture for the world of two wheels.

Your motorbike builded for you as if it were a parade dress.

but it can also be applied to all other recent EXC / F models.
The kit is produced to order, for each individual customer, only after deciding the individual specifications and needs, 100% Tailor-made.
As with the best SuperCars, the same procedure is applied in this case too.
The KTM 450 Rally Replica Kit is composed of:

1. Rally tower made of aluminum alloy, with parts in Alloy 5754 H111 specially modeled to respect the shapes and designs of the 3D model and from high-strength Alloy parts, whether they are in Alloy 6082 T6 H111 rather than Lega7075 T6 H111. The tower in the Adventouring configuration allows the assembly of the OEM instrumentation and the power support base for a Garmin navigator of the Montana series or GPSMAP 276CX, rather than an IP67 8 "Tablet (maximum size allowed)

The tower is equipped with transparent KTM style plexiglass, Full led Hella M60 lights, position light, and electrical system repositioning system.
The Full Led Hella M60 headlights can be protected by resistant headlight protection in a transparent plastic material that is easy to install/remove thanks to the quick-lock system that allows you not to use tools for fixing it.

Save this product for later
Display prices in: AUD